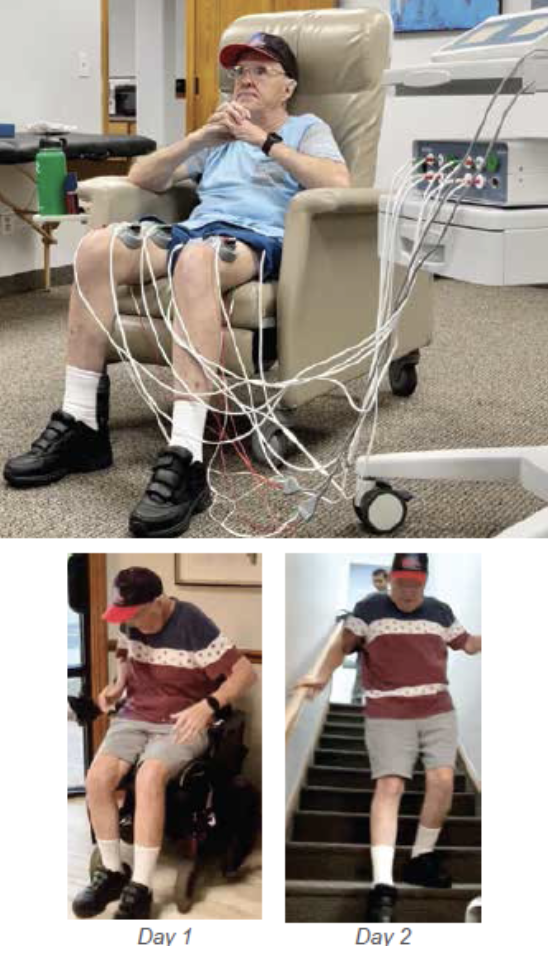 Part 1: In October 2012 Ralph was diagnosed with stage 4, acute myeloid leukemia and was hospitalized. Ten days later and after his first round of chemotherapy, hospital staff found Ralph on the floor with no pulse. CRP was started – after 15 minutes they got a pulse. After being comatose, ventilated, and extubated – 3 days later Ralph took a breath but remained comatose until December 2, 2012, when he WOKE UP! He didn’t remember his health crisis and found he was unable to move his legs. When the resident told him about his medical history, he thought he had entered the Twilight Zone. After 3 months, he was discharged to home care and given less than 6 months to get his affairs in order, but his expiration dates came and went. His health issues continued with a mini-stroke, respiratory arrests, insertion of a feeding tube, loss of sight in his left eye, and was bedridden, etc.

Part 2: His only daughter, Heather, was getting married in 2015 and he wanted to walk her down the aisle and officiate the ceremony. Mind you, he is still bed-ridden. To achieve this goal for his daughter’s big day, his physician agreed to put together a team to help him. Ralph asked that his rehabilitation be done secretly without family/friends’ knowledge. For 6 months he had a team of Occupational and Physical Therapists, Nutritionists, Social workers, and Psychologists come to his house to provide therapy for him while his family was at work. It started with simply sitting up on the edge of his bed to taking a few steps across the room. He worked hard and eventually improved to practicing outside the 50-foot walk he would make with Heather the day before the wedding on October 10, 2015. His only request was there would be no videos taken in fear of falling or embarrassing his daughter as he walked her to the alter, however, his younger brother was not aware of Ralph’s request and videoed the entire event. It ended up on YouTube and 2 days later the phone started to ring. Unbeknown to Ralph, the video went viral prompting TV vans, Radio stations, and newsletter executives from a tri-state area to show up outside his house the following day requesting interviews. To date, his video has over 4 million views worldwide! Fast forward 6 years later to Today: January 2021 Ralph saw a small ad about a new clinic, New Life Wellness in Windham, ME offering neuropathy treatment. He called, set up an appointment, and drove 50 miles for an RST-SANEXAS neoGEN Electric cell-Signaling Treatment. He had treatments 2x’s per week in March and April. Towards the middle of April during the middle of the night, he woke up to his legs feeling like they weighed a ton. He said “something is happening with my legs” and decided to return to New Life Wellness for more treatments. Ralph wanted to learn more about how ECST technology was helping to improve the quality of his life when everything else he tried over the past years was unsuccessful. He traveled to Las Vegas to receive more RST-SANEXAS neoGEN® treatment to help focus on the improved outcome. He arrived using his motorized wheelchair for his consultation with a physical therapist who planned to work with him throughout the week on a customized treatment plan. Once he was comfortable, his first treatment began on his legs and arms. The following day, he left his whee chair at his hotel and walked without assistance to receive his next series of treatments. His ability to walk up and down steps albeit slow was a definite improvement. He felt certain that returning home and receiving more RST-SANEXAS neoGEN® treatments would benefit his muscle re-education of his legs and arms and overall general health. When all the odds were stacked against him, Ralph survived when his diagnosis was considered extremely grave and seemed impossible. He looks forward to returning to a better quality of life. All of us at RST-SANEXAS wish him continued good health and a long and happy quality of life. HOPE is powerful!!