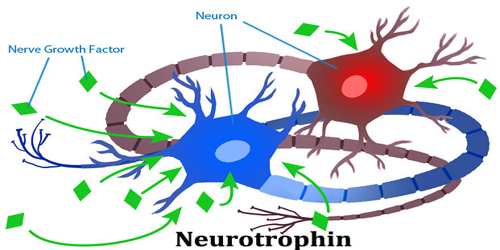 Trophic factors are specific types of protein molecules that support the survival of cells. Think of them as helper molecules that let cells maintain their connections with the molecules around them. Trophic factors work through receptors on cells to keep them alive. When trophic factors are lacking, the cells may die. This ability to support life in cells holds great promise. It also has implications for treating brain injuries, neurological disorders, and the reduction of many different kinds of pain, including the long-term intractable kind, once thought untreatable.

Many kinds of trophic factors are generated by neurons, which are cells of the nervous system, and play a role in maintaining and regenerating cells. Current neuroscience research suggests that trophic factors may also play a part in treating brain disorders and injuries. If the behavior of trophic factors is understood, and their receptors can be located, then their genes could be cloned. The cloned genes could be used to alter malfunctioning molecules in patients with neurological disorders.

What Are Neurotrophic Factors?

What Are Some Potential Benefits of Trophic Factors?

Researchers know that at least one trophic factor, nerve growth factor (NGF), slows the death of neurons that use acetylcholine. NGF is involved in the life cycle, from reproduction to migration to differentiation, of cells in the nervous system. In laboratory rats, NGF stopped the death of cells and helped regrow neurons that typically die in cases of Alzheimer’s.

Animals that demonstrated age-related difficulties with learning and memory showed significant improvement when treated with NGF. In fact, on a particular maze task, the impaired rats performed as well as rats of the same age without impairment. This data is an early indication that NGF may help slow age-related memory loss.

Here are a few more facts that we know about nerve growth factor:

Nerve growth factor research has found that the molecules may stop or slow down the growth and possibly help repair damaged nerve fibers in the spinal cord. Nogo-A is a protein that interferes with nerve growth. Swiss scientists used antibodies to override Nogo-A and successfully regrew some nerves in the rats and monkeys with damaged spinal cords. The treated animals showed improvement in their abilities to walk and use the digits of their front paws. Clinical trials of the same technology are underway in humans.

As exciting as these developments are, other newly identified factors hold similar promise. Once scientists understand how they influence neurons, these factors may play a role in treatments and cures for Alzheimer’s, amyotrophic lateral sclerosis (ALS), and Parkinson’s.

The science is so far advanced that some trophic factors are available commercially. However, growth factors can’t be taken as a pill because they break down as protein digestion. Also, they don’t cross the blood-brain barrier when injected, so that is not a viable delivery method. Scientists have identified some strategies that do work.

How Can RST-SANEXAS Help Me With Pain Relief?

Since trophic factors are essential in the health of neurons, they are a potential tool in treating pain associated with peripheral neuropathy. The disorder will likely be the first successfully treated with NGF since the nerves are easily accessible to proteins. Successful treatment of peripheral neuropathy may open the door to treatment of other neurologic disorders previously considered untreatable.

At RST-SANEXAS, we specialize in Electric cell Signal Technology (EcST) treatments, which deliver treatment to tissues in the damaged area using electric fields. The technology brings about normal recovery processes to reduce pain. The neoGEN-Series® system is a highly advanced medical device for producing electric cell signaling energy waves. This technology helps relieve pain through various methods with the potential of improving trophic factors. The system is the first and only device with a clinically researched background and a proven ability to improve patient’s outcomes. Here are some of the additional advantages of the neoGEN-Series® system:

If you’re struggling with the pain associated with peripheral neuropathy, contact RST-SANEXAS to find a doctor in your area who can help you with this treatment. Our providers’ network is ready to help you escape the day to day discomfort using our cutting edge technology. When you call or submit your information online, a member of our friendly staff will be glad to assist you.

View More From Us!